Swedish prisons are renowned for being liberal and progressive, which focus on the rehabilitation of prisoners, so as to not re-offend. Because of this, there is a very small amount of Swedes who do re-offend and return to prison after being released. It has the lowest
re-offending rate in all of Europe at just 16%.

Since 2004, prison population numbers in Sweden had been falling 1%. Since then, prison numbers dropped by 6%, and the numbers are expected to be similar, if not even more prominent in the coming years.

A prisoner (Nils, 36) from Bastoy low security prison says in an interview with the Daily Mail: "Normally all you leave prison with is two bin bags of clothes. It's like your life has been on pause. You just go on with all the bad habits you had before you went in. This is different.". This is where Sweden's prisons are dramatically different; the prisoners are able to study and take part in university courses so they are able to move on with new jobs as soon as they're released from prison, which encourages them to not re-offend.

This rehabilitative prison system shows it's results in the numbers of people leaving prison and not returning. Unlike America, it doesn't encourage people to re-offend again, as it equips them with skills they can use in the future; they haven't just missed years of their lives and they're able to get back on track after their release.


Swedish prisons have been dramatically closing over the years due to the amount of people being arrested has dropped so extremely. 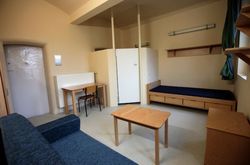 Swedish prisons treat the prisoners with respect, and give them freedoms; they're even able to communicate with the non-prisoners easier. Unlike the American prisons, the prison guards work collaboratively with the inmates, so there's the lack of tension which US prisons have, which more often than not lead to violence, threats and assaults to the prisoners.

The main focus of Swedish prisons is that of rehabilitation of the prisoners. The rehabilitation method is achieved through giving the inmates sufficient library access, access to university courses, and apprentice courses in learning a range of skills. One of the major problems with American prison systems is that when prisoners are released, they more often than not lack skills, experience and requirements that jobs consider compulsory. Alongside this, the ex-prisoners are then discriminated against and refused jobs because of their criminal record. In fact, 58% of female inmates identified as unemployment and the lack of skills to get a job as problems which contributed to their re-offending.
The Swedish prison system tackles this problem; prisoners learn how to be physical laborers, craftsmen, as well as academic jobs.

The Swedish prison system is completely effective because of it's rehabilitation program; as it allows the prisoners to be treated not as such, but as people. During their time in prison and after their release, these people are able to define themselves as not just criminals, and they're allowed to become more than their crime. Furthermore, this method of avoiding being unnecessarily cruel to people who break the law, but helping them become better people means that people don't go out of prisons with trauma, no money, no skills and no hope for the future, but with respect for themselves, and an almost definite guarantee that they won't re-offend.